On the 3rd July 2010 13 brave olympiads turned up with about 100 of their friends and families for support (A rather amazing number of whom had bad legs, backs and necks thus preventing entry!)
There were 8 events spread between the outside track and the two indoor arenas.
4 of the events were purely physical ranging from climbing the garage wall to dragging a punchbag with a rider on it down the garden.
1 was logistical.
1 was a coordination test.
1 was a test of visual dexterity
and 1 was a mental agility test.
The diversity of olympiads was beautiful; a 6ft5″ 55yr old gardner, an english student, a gym bunny, and a couple of chancers….
The crab race was the first event. It brought all competitors together at the start of the games after which they were split into groups. The start was staggered and olympiads were behaving sportingly: 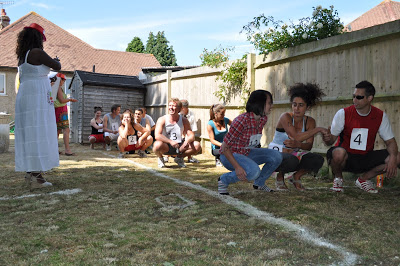 At the first corner, a few olympiads began josteling for position: 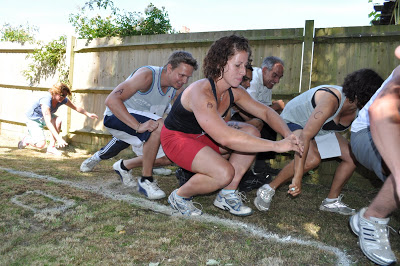 And from then on the day brought out the competitive streak in everyone. The drag and ride prooved to be the deciding event for the leg muscles of a few the next day or two. The winner (in an amazing 9 secs) was the half man half machine Gareth Edge: 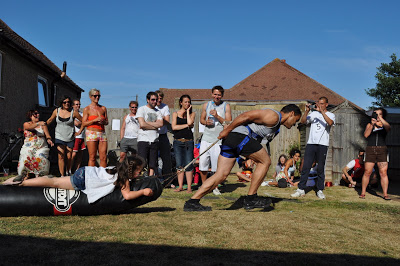 Caber tossing took place in a shaded corner of the stadium, but the judges were no less vigilant and measured to the millimetre each and every toss that got a white flag: 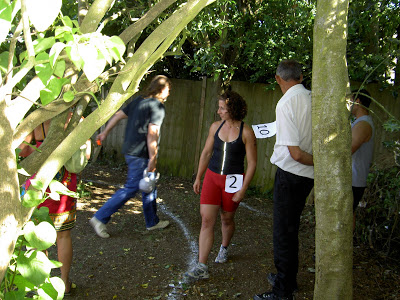 …And just when everyone was nearly spent….they had to collect in arena 2 for some flexing of a very different sort of muscle in the mental agility test: 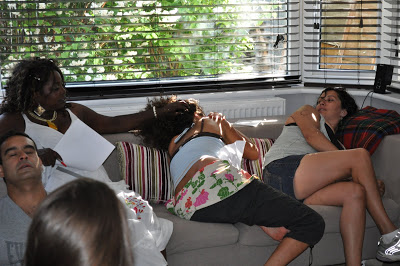 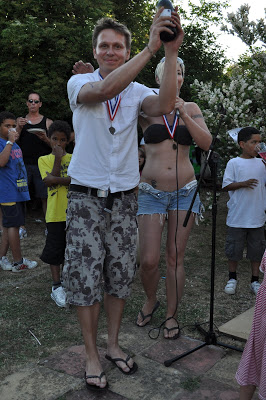 And as the day drew to a close many of the “injured and wounded” raced over to Gareth telling him they were going to de-throne him next year….lets see how their injury rehabiliataion goes first eh?
Well done to all who took part competing, serving food and drink, MC’ing, cooking, judging and playing music to help make the day a really good laugh!