Not bad for an old bird 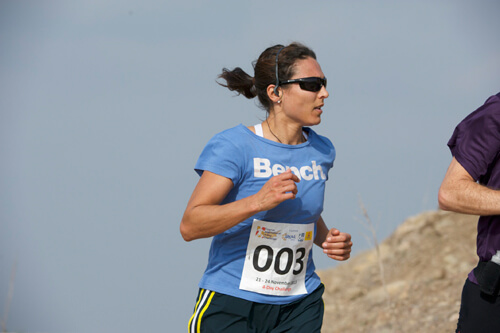 So its done! Overall I came 15th out of 41 females and in my best race (10km run) I came 12th. I came 4th in my age category overall. My overriding feeling is that I am pleased with my results but wanted to do a lot better. I am less fussed about the ranking against the other runners and more bothered by my times.

The first day was a 6 km time trial which was a quick hot run in the afternoon on tarmac. They set us off at 10 second intervals and basically we pegged it around the course trying to gauge our pace without getting confused or distracted by the runners out in front or behind!

The second day was an 11 km hill climb with a 600 metre ascent. I arrived 10 mins late to the start line due to getting lost en route and they were kind enough to keep the start open for me. Psychologically being the last and only person climbing worked well for me. I realised on day 1 that what I dislike about racing is the sound of thumping feet and heavy breathing right behind me. So again I pegged it up the mountain as fast as I could without stopping. At 3km I came across the stragglers who were walking the route and that gave me more incentive to keep going and try and catch more and more of them, which indeed I was able to do and in fact by the end I even managed a sprint over the finish – a truely enjoyable race finished in 1hr 18mins.

Day 3 was the half marathon and I felt a little achy! As you know i was hoping for a 90 min time. I was way off, in fact the winner was only 98 mins (her PB is 78 mins)and I realise that this was not the event to choose a PB half marathon as a goal. Firstly it starts with a 10 km ascent of 300 metres, secondly it the descent is treacherous with gravelly, rocky sections of dry earth covered in huge pits and cracks making it very tricky to pick a path out down once you have slogged it out to the top! Anyway excuses aside it took me 2 blooming hours!

Day 4 was a 10 km flat run, I ran well coming in at 47 mins and considering I had done the whole 4 days with a chest infection I felt totally relieved it was finally over as my body was KNACKERED!  This is a great event well organised and really friendly, I will definitely be coming back with even more training under my belt to try and smash some of my times and do better overall in the rankings.