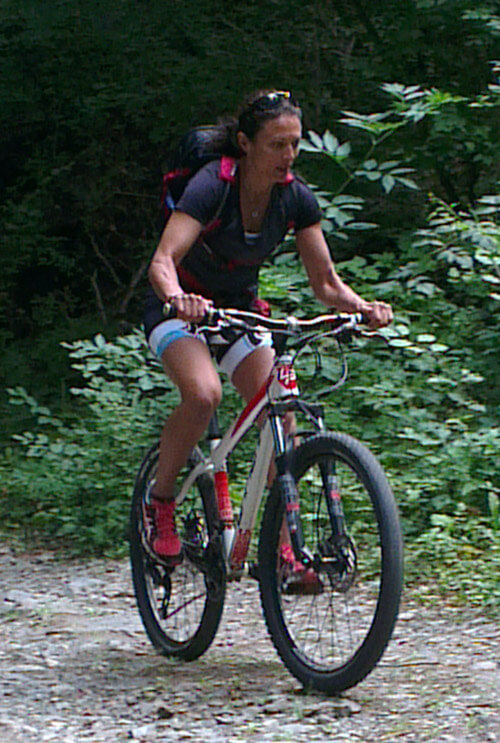 Arguably one of the most beautiful ways to see the valley of Champsaur in the southern French Alps is by bicycle. We decided to ride a slightly condensed version of the “tour de Champsaur” towards the end of August.

The weather has been perfect – almost cool for the time of year we’ve been told at around 25 degrees max and much cooler throughout the mornings until late lunch time.

So with little expectation we hopped on our hired bikes yesterday to start our day combining stages 1 and 2 of the traditional route meaning that we were embarking on a 50km ride with a 1600 metre ascent. I think that we didnt really understand quite what this meant – firstly as women on male cycle saddles, and secondly the challenge of ascending on alpine paths.

After about 2 hours we had covered 15km, which in itself was quite demoralising. But what was perhaps harder to swallow was the fact that it was really hard ascending chipped stone single track sometimes with inclines of 20 degrees – but having ascended we were often insulted with a descent on the other side – which almost made our lung burning, leg busting efforts seem in vein. Of course we knew that all metres up were chipping off the 1600 that we had to do that day.

By lunchtime we had covered 25km, we felt pleased to have cycled half of our journey given the challenges that we were presented. Our saddles were splitting us in half, this was a complete oversight and so we were unprepared with padding or vaseline either of which would have probably saved us. The terrain was undulating – stunning but none the less extremely undulating – I’m not even sure if this was actually what was so draining physically or whether it was the shards of rock that constituted a lot of the paths, but the combination made for tough cycling. As I pedalled madly in low gear up and up and up drive after drive of bumpy track I tried to remember what it had said in the brochure. I admit to reading “intermediate to advanced” in the brochure for the 6 day route and then asking them to join days together so that we could do the route in 3! I also remembered her suggesting it may be tough and then the bike hire man laughing at us and shaking our hands as he wished us “bon chance” when we told him what we were planning on our first day. And realised that I had no one but myself to blame for the fact that my bottom was now so raw I couldn’t even allow air to change pressure underneath it as I rose out of my saddle and into it, or that my shoulders felt like someone was tugging my upper arm out of my shoulder joint.

And so it was with great relief that we arrived at lunch where I proceeded to order and consume 2 main courses, much to the amusement of the hotel staff. Fortunately our afternoon was not as arduous as our morning cycle and after a puncture and a few choice words we ended up at our auberge just in time for dinner.

When we looked back at our long day we realised that the cycle although very challenging was totally perfect for us. It was stunning, jaw droppingly stunning. And the scenery changed constantly – so one minute we were cycling through grassy prairies and the next we were flying down crazy slate cliffs – people we passed were mountain folk, walkers we brushed shoulders with while we filled water bottles at mountain springs and other lovers of the outdoors – all a delight to exchange pleasantries with and often we would bump into them as our paths crissed and crossed.

Evening meals here are to die for, volumes are huge as they seem to understand the work you have done in order to arrive at the table, and of course it helps that we are in France where everything is full of butter and cream calories. Not.